Weekly Update (44) – What happened on the field 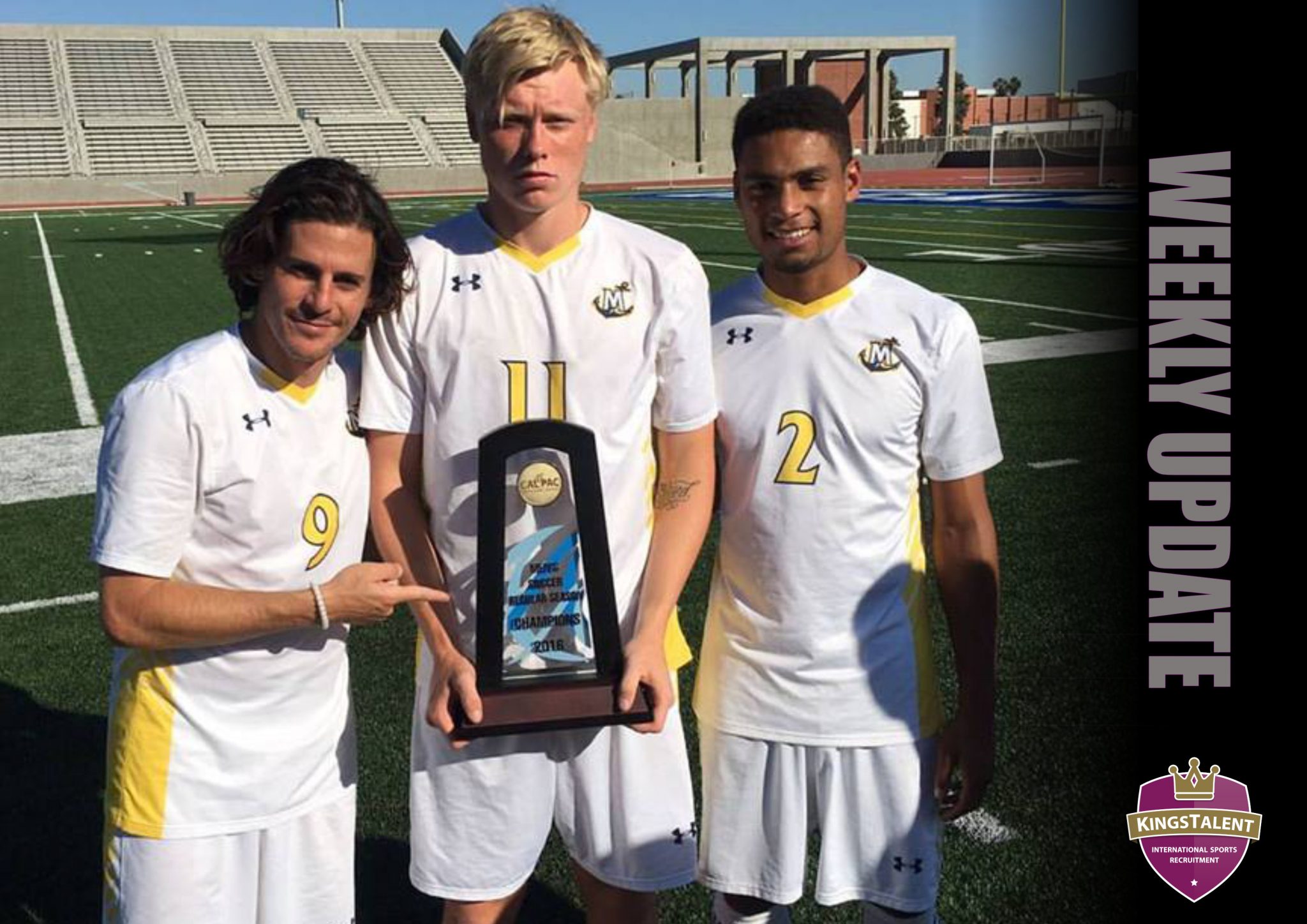 It is the beginning of November and time flies. Decisive weeks for ‘our’ student-athletes. Tag on or drop out. Performing under pressure with playoffs and championship games. Exciting times. But there are also always dissapointments. That is the nature of sports. And next to sports it’s also important to perform in school. We take a look on the American fields again.

Urbana University had a busy week! First the semifinal of the Mountain East Conference playoffs was scheduled. In a tight match the game ended in a 1-0 win over Notre Dame College. An early goal in the 2nd minute of the game was sufficient for the win. Urbana, ranked #15 nationally, had qualified for the playoffs final. The opponent was Charleston, ranked #2 nationally. The Blue Knights played this opponent two times earlier this year (1 win, 1 loss) in regular season. The game became a true thriller match with an unfortunate ending. Charleston beat the Urbana Blue Knights 2-1. Lars Blenckers did score his 8th goal of the season in this match. The Urbana Blue Knights can prepare for the nationals now.

Mercyhurst University, champions of the Pennsylvania State Athletic Conference regular season, hosted the PSAC playoffs this week. The semifinal against Seton Hall was the first challenge. In a tight match a 3-2 victory was secured. Last year the Lakers were unable to get past the semifinal of the conference playoffs, after winning the regular season championship. This time it was also a close call, but the place in the final was secured.

In the playoffs quarterfinal University of North Carolina at Pembroke played Lander. Lander, the Peach Belt Conference regular season champions, proved to be a very tough opponent, like they also where in regular season. Eventually the match was lost 4-0, Lander where simply too good. The season of Ties vd Eijnde and Ruben Taks is over.

For Freek Schoones the season is also at an end. King University was scheduled to play in the quarterfinals of the Conference Carolinas playoffs against the nationally ranked #8, Limestone College, the second place finisher of the regular season. A tough match in advance. The King Tornado’s gave it their best, but had to bow in the end. The game was lost 2-0 putting an end to the season of Freek and his team mates.

The season of Roel van Linschoten, Jurren van der Gun and Dion Viola will continue with at least one more game! The regular season champs of the Chicagoland Collegiate Athletic Conference played Trinity International University in the quarter final of the playoffs. The result was a 2-0 win! Olivet Nazarene University will advance to the semifinal of the playoffs on November 11th. Meanwhile the Tigers, due to their extraordinary accomplishment, entered the national ranking in 20th place. Exciting weeks for the ONU Tigers!

For the University of Incarnate Word men’s soccer team the season is over and the results can be summarized as unstable. Against high qualified teams the team of Wouter Peters performed really well. Just like last week. The Cardinals played Utah Valley, regular season champs, with Wouter Peters in the starting eleven. UIW started great with a quick 2-0 lead. Unfortunately the Cardinals were unable to keep the lead and the game ended in a tie: 2-2. This meant the official end of the season for the red-whites.

Rio Grande knew a good season. The expectations for the NAIA national champion of 2016 where very high from the get-go. The season went very well with the conference regular season championship as a result. On the 9th of November the Rivers State conference semifinal is scheduled against Ashbury University. This opponent was beaten just last week in regular season: 5-1. The team of Indy van Sas will have to keep sharp and be mindful of underestimating their opponents, they will have to give everything they’ve got to fulfill the high expectations in the Conference playoffs.

In the Big East playoffs the match Villanova – DePaul University was scheduled last week. With Stijn vd Slot in the starting eleven the game ended in a tie (0-0). Eventually PK’s had to appoint the winner. Unfortunately the Blue Demons came up short. Due to the loss the successful season of Van der Slot and the DePaul University Blue Demons is at an end.

Marymount California University has won every single game in their conference and can call themselves regular season champions of the Cal Pac Conference. An excellent performance from the team of Ouren Nikkels and Rowan Mankers! Now the most important task for the Marymount Mariners is to win the playoffs and look ahead to the nationals. On the 10th of November the semifinal in the Cal Pac Conference playoffs in on the schedule.