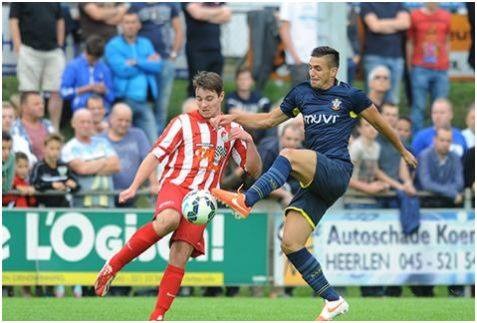 What started as an internship at KingsTalent ends in an adventure in North-America. Tom Maas, who recently graduated his Sports Communication major at Fontys University of Applied Sciences, continues his academic and athletic career in Tiffin, Ohio. Here, the midfielder enrolls in the Sports Management MBA program.

The past months Maas was Social Media Manager at KingsTalent, besides writing his thesis for graduation. After just a few weeks working in Gemert Tom was taken by the enthusiasm and experiences of the ‘talents’ in the US. After successfully graduating his education program in Tilburg he got the green light for his very own transfer to the States. Just one of many highlights in the first six months of 2018, where he recovered from an ACL injury and won the championship with RKSV Minor in the Eerste Klasse D.

In the past, the dynamic #8 competed for EHC Heuts, where he played in all the highest youth teams from age 14. During his first year as an U19 player Maas was added to the first senior team selection by head coach Ole Tobiasen, former player of Ajax Amsterdam en currently part of the Danish National soccer team coaching staff. Maas plays some remarkable games, among others against English side Southampton, at that time managed by Ronald Koeman.

Next season Maas battles with the ‘Dragons’ in the Great Lakes Intercollegiate Athletic Conference. In this competition the team of head coach Rudy Brownell competes against Lake Erie College, the team of Aaron Middendorf, another KingsTalent-athlete.

Meanwhile Tom has already started a road trip in Western America. We will keep a close eye on Toms achievements and wish him a lot of success in Tiffin, Ohio!