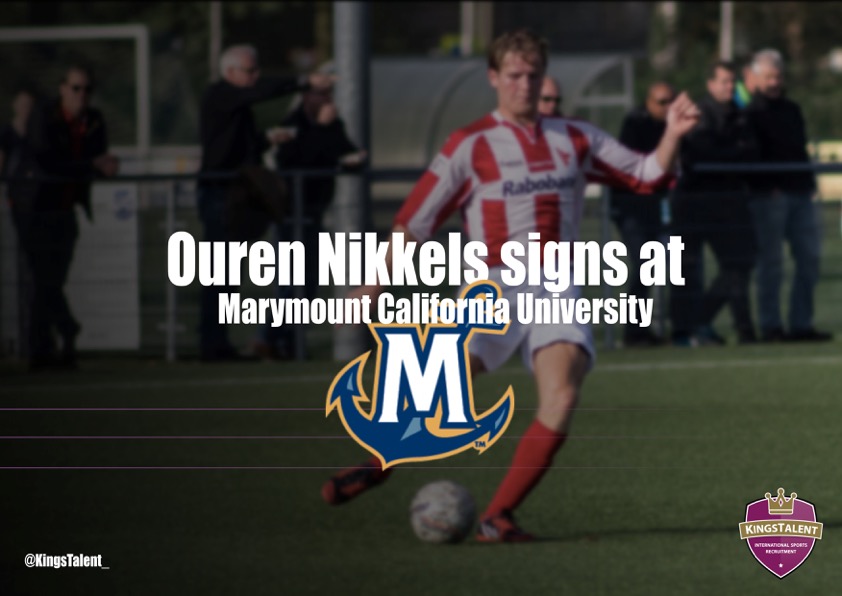 KingsTalent is very proud to announce that 21-year old Ouren Nikkels will transfer to Marymount California University this summer. He will move from Wageningen to Los Angeles to study and play soccer.

The Marymount California Mariners, the current (2015) NAIA California Pacific Conference (CAL PAC) champions, will make a run for the title again in the 2016 season. Head coach Mark Hervin: “Ouren is a strong, athletic defender who is comfortable in possession. With Ouren we are trying to add more playing ability to our team. Besides this he is a ‘real asset’ with set pieces where his heading ability and power will earn us goals. We are very pleased with signing Ouren to our team.”

With the adding of Nikkels to the team coach Hervin wants to make a deeper run in the NAIA National Championship, the MCU team was knocked out of the 2015 Nationals in the first round. The physically strong defender will be a part of an impressive international team with players from England, Egypt, Israël, Germany, Brasil, Croatia, New Zealand, and of course the USA.

The current player of VV Bennekom made his first appearance in the first squad of JVZ Zuidwolde at the age of 17. After this Ouren played at PEC Zwolle and Haugesund FK (NOR) for a short time, before choosing for a transfer to Bennekom, mainly because of his studies.
The head-strong centre back will be looking forward to an amazing adventure. He will enroll in the MCU undergraduate Business Administration program and will move on to the Ocean View Campus, just south of Los Angeles.

The MCU campus is located on the border of the Pacific Ocean, between the beaches of Santa Monica and Newport Beach. Combining his studies and playing soccer in beautiful California is like a dream coming true for Ouren. He will report to the campus in July 2016 for preparations and preseason.