Lars Blenckers looks back on fall season Urbana U 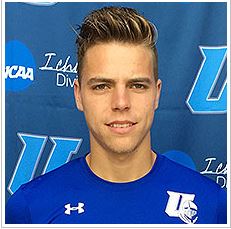 KingsTalent is keeping a close eye on the developments and experiences of Thom Derks and Lars Blenckers this season in the US. We will post blogs, interviews and other news related to them on a regular basis. In August they left to study in the USA. Meanwhile the season has ended. A very successful season! We look back on Fall Season with Lars Blenckers.

The season has ended. How do you feel?
The last few months just flew by. In the beginning it was hectic with a lot of practices and settling in the new environment. But when the season and the classes started, time flew by. Every week we played 2 games and from our 17 games in the regular season 11 were away games. These away games were always combined with a long trip and spending the nights in hotels. Eventually we had a great season and for the first time in the history of the school we reached the NCAA playoffs for the national title. Outside of the field I can also look back on a few great months. Our group is very close and we spend a lot of time together and do fun things like go out, visit sports games, coaching teams and even the time that we all had to work at an American Football game was a fun experience.

Can you give us an insight in the highlights of this season?
Highlight of the season was absolutely that we now belong to the best 16 teams in the country. Before the season started the expectations weren’t that high so it’s really nice to be part of the team that makes history for the school. I started out as an attacker but moved to the midfield rather quickly and managed to score 4 times in that role, in which 3 goals as ‘matchwinner’. Next to the goals I also gave 6 assists. All in all in was a reasonable season for me, with the absolute highlight qualification for the NCAA playoffs. We went to the second round as the number 21 ranked in the country and played against Millersville. Previous to this game there was some sort of parade on the University to wish us luck in the game. We won the game 1-0 which meant we had to play Charleston again in the 1/8th final. That team is the best team in the country in my opinion and we already lost to them twice. The game in Charleston we lost 1-0 by a late goal in the 79th minute. I can say that this was probably the greatest game I have ever played, with all the atmosphere surrounding it! Amazing! Because we played in the NCAA tournament all expenses were covered by the NCAA and we got expensive meals and stay-overs in the best hotels. Unfortunately I haven’t been able to make a lot of trips outside of soccer because of the busy season. But I did enjoy the NBA and American Football (Ohio State University, number 1 nationwide) games. I’m also experiencing Thanksgiving at an American family, which is really unique. Luckily we have a little more free time next semester and also friends will come over to visit so making trips will probably be on the schedule.

What was your highlight if you had to name just one?
The last game against Charleston, which unfortunately we lost 1-0, and the whole trip and atmosphere surrounding this game.

Urbana managed to get ranked nationally for the first time in the school’s history. You belong to the 25 best teams in the country! What was it like to be part of a team that made history?
It’s an unbelievable experience. Urbana University is not really known for its great athletic achievements, so you can imagine that the soccer team became really popular when it was announced that we were going to play nationally. For us to realize just how special this was became apparent when a police escort accompanied us off campus. The entire school supported us and there was a lot of attention for our games in the playoffs.

You made it to the Nationals! A great achievement. In which round did you go out eventually?
The preparations for the nationals were great. Both times we left two days before the game to prepare. We were offered $25 meals so we could eat what we wanted and didn’t have to worry about anything. Unfortunately we stranded in the final 16, also called Sweet 16.

Of course you also have to study besides playing soccer. Which study did you take? And how are your results?
As graduate student I have little trouble combining soccer with school because I don’t have a lot of classes. And the classes I do have are relatively easy so far. I currently have a 4.0 GPA and that is the highest possible score. But this says little because I think every grad student achieves these grades. I believe undergraduates possibly have more trouble combining school with sports. They have more homework and can’t follow classes when we are on the road to away games or when we have a home game. They say that school comes first and sport comes second, but in fact everyone rather sees you on the field than in class. Also important is that students must maintain a certain GPA to be able to play.

What’s going to happen the coming months?
I’m currently celebrating Thanksgiving and I’m going home for about 4 to 5 weeks for Christmas and New year. After that I’m leaving for the US again to start spring semester in January. What that program looks like I don’t know yet.

KingsTalent is in full preparation to bring new talents to the US in 2016. Do you have any tips or advice?
All the preparation and effort you have to put in to make this step is definitely worth the trouble. But I can give you the advice that you have to check out the school before you go. There are a lot of different schools en a lot of different locations. I talked to a few English guys from Concord University and it appears there is not much to do there. Luckily we have a great group and with Columbus on a 45 minute drive we don’t have to be bored here for even a minute.